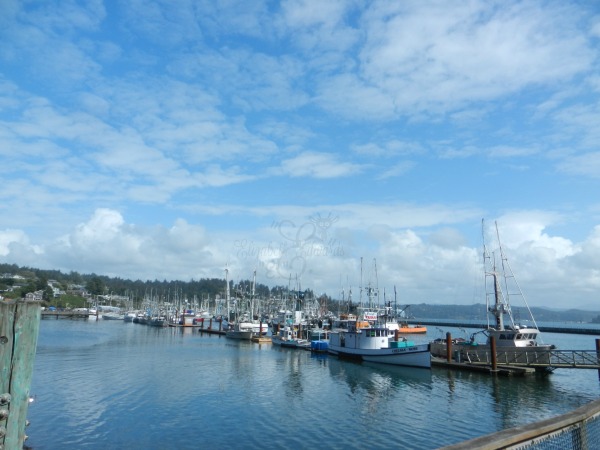 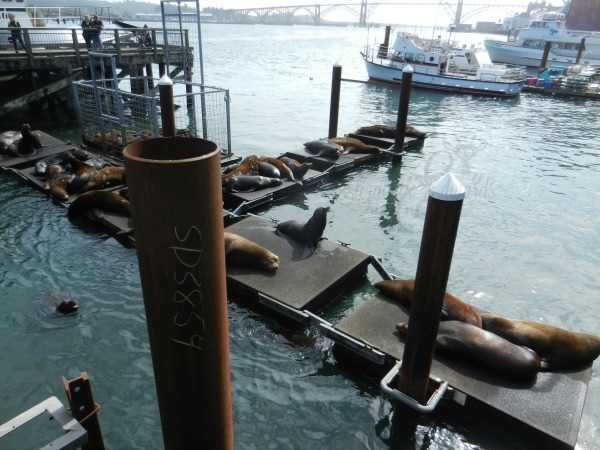 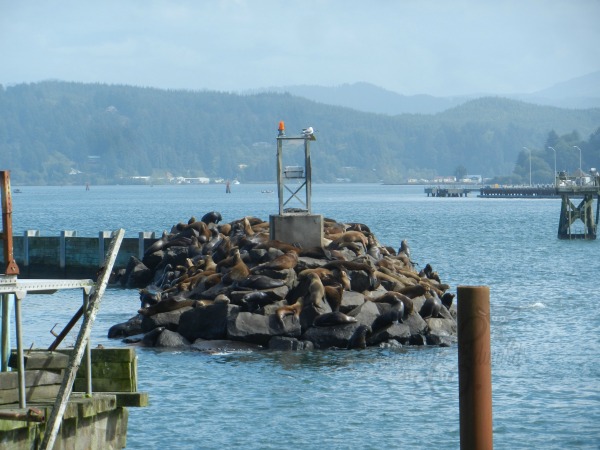 Let's talk seafood. I love shrimp, eat fish often, not at home but usually if I am out at a restaurant and what not. My hubby was raised on the coast of Virginia, so you would think the man would enjoy seafood. NOPE, not one bit. He will try it but doesn't usually enjoy it like I do. I have tried crab. Never tried lobster or oysters, don't really plan on it either. Had a friend who got scallops & I tried a bit, didn't hate them but I don't think I need them again. We had calamari ("squid". why did I think that was octopus, maybe I have tried that too?) as an appetizer with friends. When trip planning the hubby knew we had to go to "Mo's AMEX". & they are famous for their "clam chowder". So they hubby was like, I don't like seafood but this is what they are famous for... just saying we got a clam chowder to go and well as a dish while eating our meal. IT WAS DELICIOUS!! you have got to try it!! YUM, yum, YUMMY!!

Check out these seal lions right near Mo's restaurant... apparently the locals think they are a real pain. Here's an article about the issue: "Sea Lion Problems". I just thought it was interesting to see all the folks taking pics & checking them out??! Think of all the money, Newport could raise?

I often wonder how towns, cities and other places get these names? Newport, Oregon is named: "The Friendliest in Oregon". My question (thought) is: I would hate to met their meanest? They don't even make sweet tea? WHAT? Hey, I am a southerner I love my sweet tea. Goes great with clam chowder!! (wait, clam chowder, is that a northerner thing?). I hope that doesn't sound mean, just didn't think the folks there were overly friendly, unlike some of the locations we have traveled over the years. We loved our trip there, but most of the folks who we did meet were not from there, we always find out tons of info from fellow traveler verse locals. Beth ( :
Labels: State of OREGON Vlogs - Videos

eileeninmd said…
Hello, Beth! I love trying the local restaurants for their local food specialties. Growing up in Maryland, I love all seafood. Pretty shots of Newport Oregon, I like the sea lions. Happy Monday, enjoy your new week!
4/18/16, 7:48 AM

Ruth Hiebert said…
Great pictures and interesting words. I guess you and I wouldn't like eating together.I am super fussy when it comes to eating any seafood.It has to be fish that doesn't taste like fish and be prepared in a certain way.Guess you could say that Im not a seafood lover.Just a thought,it's not as though we were planning on going out to eat together anytime soon. LOL
4/18/16, 2:38 PM

This N That said…
Would love to visit Oregon and the North West..Have never been there except passing thru to go to a cruise ship..Beautiful for sure..Like the Sea Lions..WOuldn't want to live with them though..
4/18/16, 5:00 PM

Anne Payne said…
Having recently relocated to the coast of VA, I have to say that most restaurants don't serve sweet tea. What a bummer!!! VA is not the south anymore ;) I tried Crab Cakes for the first time and LOVED them! Oh my goodness, they are soooooo delicious. Have you had those?
4/19/16, 5:54 AM

Coloring Outside the Lines said…
I like shrimp..every now and then, and fried catfish, bream and crappie. Otherwise, I just try not to look at my husband's plate if he's eating crab or lobster, frog legs or any other type seafood. Of course frog legs would be crick and lake food, I guess. LOL! I've been in towns on vacation before where the locals were very rude. I guess it just depends on where you go. I can imagine locals being tired of tourists, but still, rude is rude wherever you are.
4/23/16, 9:30 AM 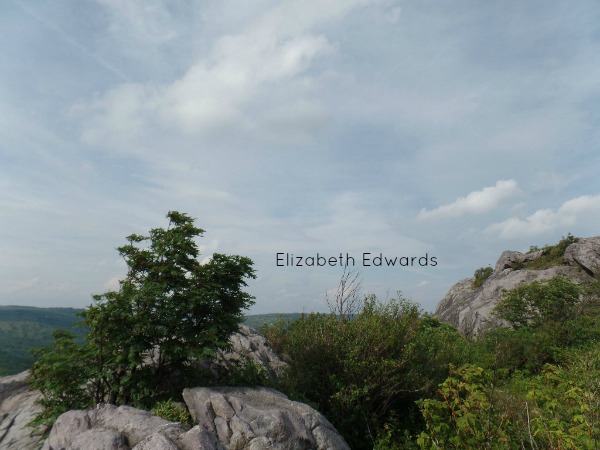 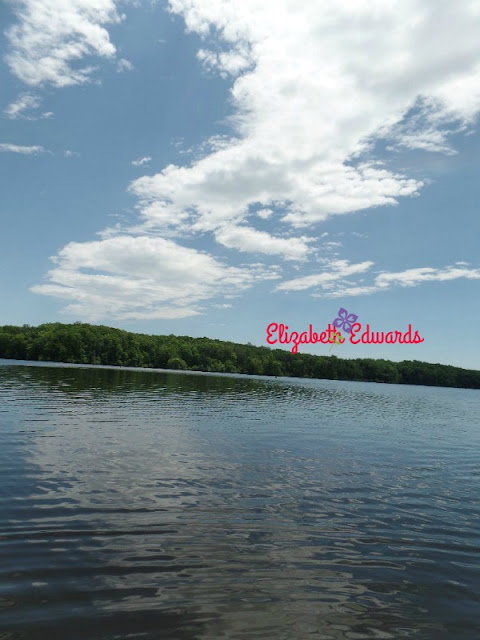