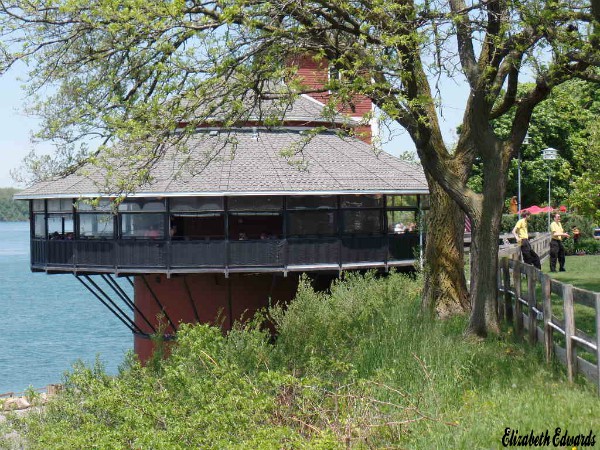 "The Silo Restaurant- History Never Tasted So Good!
Our story begins in the 1930’s, back when this area was referred to as the ”Hojack Country.” The waterfront was bustling and alive with tourists visiting by the thousands, traveling  the Great Gorge Railway. The Lewiston Silo was home to the coal that fueled these steamers, and played an important role in housing the fuel that kept the waterfront alive. The waterfront became a hub of great activity, and locals set up stands to sell souvenirs and novelty items to visitors.
Sadly, with the demise of the Great Gorge Railway in 1938, the construction of a superhighway to Toronto, and excessive pollution strangling the river, the waterfront activity declined. An ice jam destroyed the terminal and The Silo sat alone, baring witness to the piling of sand dredged from the river bottom and the quiet sounds of pigeons roosting in the top of the decaying superstructure .
The old silo had a moment of glory during the winter of 1955 when it held back the huge ice jam that threatened to destroy homes along the river bank, then continued sitting quietly until In 1978 when a rebirth began. The Waterfront once again held promise. The village trustees purchased the land and opened it up to fishing, and a launch was put into place. Through the efforts of several municipalities the river was cleaned and cleared and began to attract fishermen from all over the northeastern United States.
Although the waterfront was once again breathing new life and new energy the old coal silo still sat empty. A constant query was what should be done with "The Silo" that had once supplied the steamers with fuel and protected the homes and people of the river bank.  Suggestions ranged from tearing it down to putting in a bait shop, or turning it into an observation platform.
The answer came in the Spring of 1997 when Mr. Richard Hastings of Youngstown approached the Village of Lewiston trustees with a vision to convert the silo into a refreshment stand. Encouraged by Mayor Richard Soluri and using his own funds, he devised a plan which included building a platform which encircled the entire structure to create seating for his customers. The view of the river from this vantage point was and still is spectacular!
"The Silo Restaurant" opened its doors in April of 1998 and 30 days later Richard Hastings handed the keys over to his son Alan believing he had the energy and foresight to take the refreshment stand to new heights. It seems he was right. Alan Hastings set forth in the genuine spirit of an environmentalist and sought out ways to re-use and recycle items to outfit the restaurant. He created tables, seating and countertops from recycled church pews and has selected “Greenware” - plant based cups, lids and utensils, and is even using the grease from his fryer's to power a fleet of gas free vehicles known as "Veggie cars".
In 2010 Alan Hastings set sights on an old run down retired train caboose. Originally built in 1890 as a old wooden boxcar for The Canadian National Railroad, it was then converted into a caboose in the 30's having said to have derailed in the 70's. Alan Hastings saw both a great opportunity to recycle and preserve a piece of  historical significance with the old box car  and he knew it had to join The Silo as a "piece of history, allowing visitors to remember the waterfront as it once was". The boxcar has been restored and is now known as The Silo's Ice Cream Caboose, featuring a weekly custom custard, and housing over 40 flavors of ice cream!
Although The Silo remains a landmark, having observed the changing of the landscape of the Lewiston waterfront for nearly 100 years, it is now a thriving restaurant serving thousands of patrons from all over the world each week! Like The Silo itself, the restaurant has evolved over time and is now serving up a fantastic variety of high quality menu items that are in tune with the ever changing tastes of its patrons.  They have recently launched a new catering menu, which includes carving stations and the option of having a real Silo chef join you at a location of your choice, making your event a gathering to remember! Let the Silo cater your next event, stop in for a meal, or take one away! History never tasted so good!"

we got "The Original Haystack" and "Silo Burger", both very unique and quite delicious, very cool flavors! i don't recall the name of the ice cream we did get from The Caboose, it was delicious! so yummy good. we did get this recommendation to go to The Silo from the lady at the front desk working at Fort Niagara ...well done, it was so fun! be sure to check it out if you are in that area. have a great day. i appreciate your comments. see ya again real soon. Beth ( ;
State of New York

Ruth Hiebert said…
Sounds very interesting.You find some of the coolest places to explore.
9/25/18, 11:07 AM