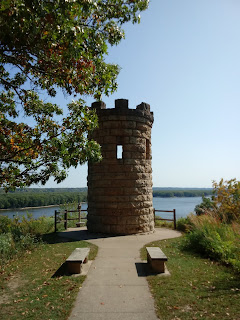 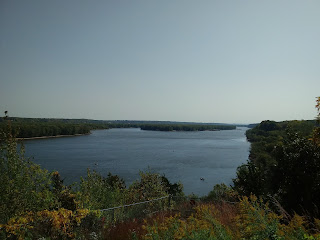 Julien Dubuque
Miner of Vines of Spain
Founder of Our City
Died March 24, 1810
"Julien Dubuque was a French Canadian of Norman origins from the area of Champlain, Quebec who arrived near what now is known as Dubuque, Iowa, which was named after him. He was one of the first European men to settle in the area. He initially received permission from the Meskwaki Indian tribe to mine the lead in 1788, which was confirmed by the Spanish, who gave him a land grant in 1796."
Such a gorgeous area, Dubuque, Iowa, I am curious why the did pick this space for his final resting spot???? and I pray he did have a chance to enjoy this view, because I sure did. You could see for miles, not familiar with the area, but I am curious what all you were seeing? It is just breathtaking, a bit of coloring there. I think that was Sept 2020, we were in that area of the US. Fun walk, and just enjoy the breeze and day. Thank you for stopping by today. Hope you are well. Take Care. Beth ( ;
Cemeteries Gardens State of IOWA

Maggid said…
Think I'm going to have to find this place . . . sure looks fabulous.
Thank you for sharing your adventures with us/me.