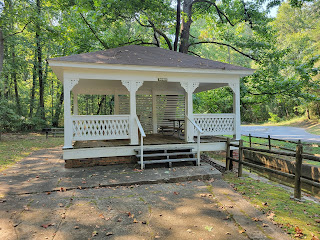 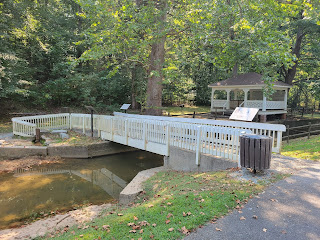 My Grandma Ruby would come here throughout her life to fill up her jugs of this water, I know she appreciated our help carrying them to and from the car and house. My hubby did try it the day we were visiting. I don't recall it being good or bad, just something that Grandma always had done. I never realized the story ...so I wish to share it with you today ... I think they have dressed (with paint and cleaning up the place??!) it up a bit since when I was young ... adding these plaques of all of this important, very cool information:
"Early History
In 1728, a survey party led by William Byrd II visited these springs. In his diary, he wrote that the spring water was "...what Adam drank in Paradise ..." by the help of which we perceived our appetites to mend, our slumber to sweeten, the stream of life to run cool and peaceable in veins, and if ever we dreamt of women, they were kind."
Byrd sighted a buffalo near the springs, hence the name Buffalo Springs. Beginning in 1817 a tavern and later a small resort were operating at the springs.
Healing Waters
When Thomas F. Goode acquired these property in 1874, Buffalo Springs gained national prominence.
It was the water that made Buffalo Springs famous. It was believed that lithia found in the spring water was effective in treating gout, rheumatism and several other aliments.
The curative attributes of "Buffalo Lithia Water" were widely touted, and there were nearly 20,000 outlets selling half-gallon jars of the water worldwide.
The Golden Years
The fame of the spring water spurred expansion of the resort. There were hotels, cabins, a tennis court, bowling alley and golf course at Buffalo Springs. Visitors enjoyed horseback riding, nature walks, dancing to live music, and boat rides on a pond.
Times Change
In the early 20th century medical knowledge and treatment improved dramatically. The amount of lithia in spring water was no longer considered to be medically effective.
However, "Buffalo Lithia Water" continued to be marketed until a 1914 court ruling disallowed the use of the word "lithia" to sell the water of Buffalo Springs. Worse yet, the court ruling stated that, "...for a person to obtain any therapeutic dose of lithium by drinking Buffalo Lithia Spring Water he would have to drink from 150,000 to 225,000 gallons per day."
Even after "Buffalo Lithia Water" fell out of favor, the resort continued to be popular with locals. In 1949, the U.S. Army Corps of Engineers purchased the land around Buffalo Springs for the John H. Kerr Reservoir. The buildings and their contents were auctioned and hauled off. About all that is left of the resort is a gazebo and a tap from which locals still come to fill their bottles and jugs with the water that "Adam drank in Paradise."
Thank you for stopping by today. Hope you are well. Take Care. Beth ( ;
Bridges State of VIRGINIA

Barbara R. said…
I just realized that in FL there's a Lithia Springs...I wonder now if it contains lithium in the waters. Buffalo Springs must have offered help to all those people who kept coming back, including your grandmother. Sometimes just small doses are just what is needed. I cut one of my pills in half each night rather than taking the full dose!
7/3/22, 9:54 AM